Dumont d’Urville is the historic French station. Opened in 1956, the Dumont d’Urville station is named after the first French explorer to set foot on Antarctica. This station was built on Petrel Island (l’île des Pétrels) which is located on the coast of Adélie Land, a territory governed by the French Southern and Antarctic Lands (TAAF).

The Polar Institute ensures the functional management of the station and manages the scientific projects carried out there. TAAF maintains sovereignty and the public service missions there (radio, medicine, postal services).

The site for the construction of this station was partly chosen because of its proximity to the Emperor penguins that come to breed on solid ground nearby. Adélie penguins, a smaller species, are an integral part of life at the station given that the station was set up in the middle of their habitat. A large part of the studies carried out at the station is focused on biodiversity research, particularly marine, how it is changing and how it is adapting to climate change. Dumont d’Urville is also an observation platform for the atmosphere, the ice cap and the geophysics of our planet.

The station is a genuine scientific campus with fifty or so buildings: living areas, research laboratories and utility rooms. It is also the gateway to research and logistics activities on the continent, particularly via the Robert Guillard facilities at Cap Prud’homme, where supply convoys to the Concordia mainland station and Antarctica scientific exploration traverses are prepared.

In 1950, 110 years after Jules Dumont d’Urville landed on Adélie Land, the French Polar Expeditions (EPF) installed a first station on the Antarctic coast: Port-Martin where 11 people overwintered, and who made the first meteorology and magnetism observations and carried out numerous exploration traverses. In 1952, the station was completely destroyed by a fire. The third expedition, which had just landed, then settled on the Pointe Géologie Archipelago on Petrel Island. This small temporary observatory, whose buildings were nicknamed ‘Marret Base’ still exists, but was closed in January 1953.

Petrel Island, located at the foot of L’Astrolab glacier, was once again selected in 1956 to take part in the International Geophysical Year (IGA) of 1957-1958. The buildings erected for this occasion, part of which is still being used, were designed for 20 people and a temporary occupation of three years. This station was called the Dumont d’Urville station. A forward station, Charcot base, was installed at the same time 300 km from the coast and at an altitude of 2,400 m, not far from the south magnetic pole. Three scientists overwintered there for two years.

Dumont d’Urville’s first buildings were made of steel with thermal insulation sandwiched between fireproofed plywood and Klegecell PVC foam. The main base is surrounded by 11 small wooden shelters for various scientific uses and a garage for the maintenance of tracked vehicles such as Weasels and Snowcats. During the summer campaigns, the EPF received assistance from an army helicopter.

Since the Dumont d’Urville station is ideally positioned to study magnetic and solar phenomena in the upper atmosphere, the results obtained in this field during the IGA were remarkable. Traverses over the ice sheet were organized from Dumont d’Urville; this allowed for the acquisition of numerous glaciology and meteorology data and the production of seismic and gravity profiles which made it possible to estimate the thickness of the ice.

In 1959, the French government decided to maintain the station on a permanent basis and to continue the research work. This decision made it necessary to rebuild and expand the station during the following summer campaigns. Since then, the station has been continuously occupied.

Adélie Land is a region in East Antarctica, roughly facing Tasmania. It represents an area covering 432,000 km2 delimited by the Geographic South Pole (or Terrestrial South Pole) and the 136th and 142nd meridians.

Adélie Land is the region claimed by the French government which has entrusted its management to the French Southern and Antarctic Lands (TAAF).

However, the station is regularly lashed by winds, at 35 km/h on average, and especially the katabatic winds roaring in from the ice sheets, which have been measured to peak at close to 250 km/h.

Precipitation is difficult to measure because the snow is re-suspended in the air by the wind, but meteorologists count an average of 100 days of snow per year on average.

The geographical position of Dumont d’Urville means that, unlike most of the continent, a daily solar rhythm is still observed there. However, the day can be very long (up to 24 hours in December), or very short (4 hours in July).

The buildings cover a total surface area of approximately 5,000 m². Over winter (March to November), the base accommodates between 20 and 30 people divided between the general services and the scientific services ensuring that data are acquired for the French laboratories involved in the polar programs.

Water production : Domestic water is produced by a still-based desalination unit heat from the power station’s cooling circuits. An average of 5,500 L/day of water is produced in summer. There are also plans for using co-generation to supply part of the collective heating.

Waste treatment : Waste treatment is a major concern. It corresponds to an international objective to reduce the impact of human presence on the Antarctic continent. Efforts are focused on reducing the volumes to be treated, as well as developing sorting procedures and storage methods. It is complicated to repatriate waste.

The handover between inbound and outbound wintering personnel takes place during the summer campaign. Members of the Institute’s permanent personnel and contractors help the technical teams out depending on the logistical needs and the sites. Most of the scientific projects are also implemented during the summer campaign, therefore Dumont d’Urville hosts the researchers in charge of these projects and their team (PhD students, engineers, etc.).

Supplying the station and transporting personnel

Due to the climate and the expansion of the sea ice surface along the coast of Adélie Land during the austral winter, it is only possible to access Dumont d’Urville between the months of October and March.

L’Astrolabe is primarily responsible for supplying the station with food, equipment and fuel.

Personnel are transported by plane from Paris, either to Hobart, in Tasmania where they can board L’Astrolab or take another plane to Antarctica, or to Christchurch in New Zealand where a transcontinental flight will take them to Antarctica. In Antarctica, planes generally land at the American Mac Murdo, or the Australian Casey stations, which are equipped with a landing strip that can accommodate Airbus A319 or Hercules C130. The connection to Dumont d’Urville is then made on board smaller planes, Twin Otter or Bassler planes.

L’Astrolabe is an ice-breaking vessel (Class 5 Polar Class Icebreaker) built in 2017 to replace its predecessor of the same name. 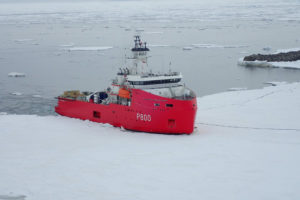 L’Astrolabe makes four to five round trips between Hobart and Dumont d’Urville, called ‘rotations’, per year between November and February. These rotations allow for the provision of supplies to the Dumont d’Urville and Concordia stations; freight continues on to Concordia via land convoys. With 40 or so passengers on board, L’Astrolabe also plays a vital role in transporting scientific and technical personnel to these stations.

Until 2012, the first rotation of the R0 vessel was scheduled in late October, during early austral summer. This makes it possible to transport technical teams and equipment preparing the traverses over land to the Concordia base. Given that the ice conditions were still uncertain at the time, two helicopters had to be loaded onto the vessel so that they could guide L’Astrolab through the pack ice and allow transport from the side.

Since 2012, the ice conditions on the approach to the Antarctic continent have changed and pack ice is still present during the austral summer thereby forcing the Polar Institute to adapt so that the vessel can be unloaded (disembarkation on the pack ice).

June 2015: the vessel is commissioned from Piriou shipyards by the French Overseas Ministry

September 2017: it is registered at the Pointe des Galets port on Réunion Island

November 2017: departure of L’Astrolab for its first crossing of the Southern Ocean

Dumont d’Urville is a long-term observation platform of fundamental interest for studying the atmosphere, the ice cap, geophysical phenomena and animal populations (mammals and seabirds). It is a key element in several international networks monitoring the evolution of our planet. In addition to these long-term studies, there are numerous short-term thematic research projects.